Starting at
$3.00 for 30 days
Get Started
View all rates
You have permission to edit this article.
Edit
Home
News
Sports
Community
School
Opinion
Obituaries
e-Edition
Subscribe
Apple Festival
1 of 3 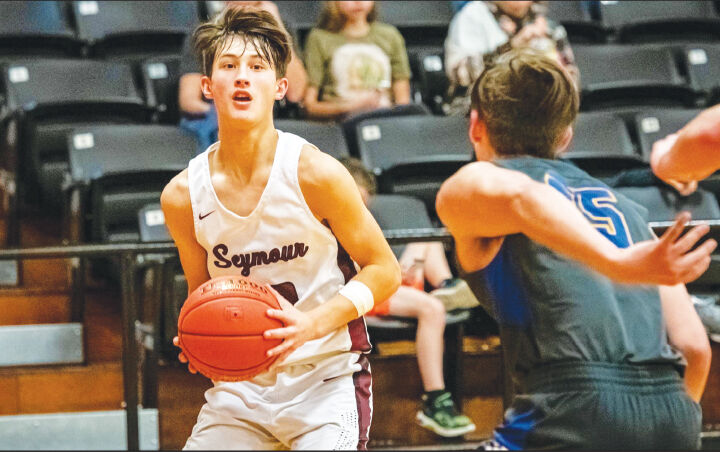 Seymour's Dylan Henry, left, a 6'5" junior forward, prepares to drive to the basket in the Tigers' 57-54 victory last week over Macks Creek. Henry had 13 points and 7 rebounds as the Tiger record improved to 8-1 with the three-point victory.

Seymour's Chade Noble, second from left, a 6'0" junior guard, drives to the goal and scores in key fourth-quarter action of the Tigers' narrow 57-54 decision over Macks Creek in the second round of the Walnut Grove Holiday Classic last Monday, Dec. 27. Noble led the Tigers with 6 assists in the win, which improved the team's record to 8-1.

Seymour's Dylan Henry, left, a 6'5" junior forward, prepares to drive to the basket in the Tigers' 57-54 victory last week over Macks Creek. Henry had 13 points and 7 rebounds as the Tiger record improved to 8-1 with the three-point victory.

Seymour's Chade Noble, second from left, a 6'0" junior guard, drives to the goal and scores in key fourth-quarter action of the Tigers' narrow 57-54 decision over Macks Creek in the second round of the Walnut Grove Holiday Classic last Monday, Dec. 27. Noble led the Tigers with 6 assists in the win, which improved the team's record to 8-1.

But he’s not disappointed, either.

“These are games that ultimately make us a better team,” the seventh-year head coach said. “Although we ended the tournament with a pair of losses, they came against a pair of large Class 4 schools that have very good teams.

“A year ago, we won three games on the back side of this tournament. But it’s much more satisfying to be playing with the tourney’s best teams in the final four on the winner’s side despite a couple of close losses.”

For a team with postseason aspirations, Hastings said he welcomes the challenge of quality competition.

“These are games that Class 2 schools often don’t get to play ... where you’re taking on a quality Class 4 opponent,” he noted. “We had our chances to win both games, especially so against Forsyth, and Forsyth ended up winning the (tournament’s) championship.”

Seymour enters the new year with an 8-3 record after wins in the tournament’s first two rounds against Fair Play and Macks Creek, respectively.

In the semifinals, the Tigers fell to Forsyth 52-49.

The Tigers dropped the event’s third-place game to Hollister by a 57-49 count.

“We’re a better team because of this tournament,” Hastings said. “You only get better when you’re playing good teams and competing. And there’s no doubt that we were competitive against Forsyth and Hollister.”

In the tourney’s first-round game played on Wednesday, Dec. 22, Seymour cruised to a 73-30 victory over the No. 15 seed, Fair Play.

That set up a matchup last Monday, Dec. 27, against the seventh-seeded Pirates of Macks Creek, who entered the contest with a solid 8-2 mark.

The Tiger advantage was 15-10 after one quarter.

Then Macks Creek rallied, closing the frame’s final five minutes with a 15-2 run that reduced the Seymour lead to only two points at 39-37.

“I felt we began coasting early in the third quarter, and we let them creep back into the game,” Hastings said. “Before we knew it, we had a close game on our hands, and Macks Creek battled us until the end.”

The Tigers didn’t surrender the lead in the fourth quarter, although the Pirates did cut the Seymour lead to one point on two occasions.

“This game woke us up,” Hastings said. “We learned that we have to keep focused for the game’s full 32 minutes.”

Senior forward Bryson Benson was the Tigers’ offensive leader with 17 points and 9 rebounds.

With 2 points each were senior Ivan Whited and junior Chade Noble.

Noble led the Tigers with 6 assists.

Seymour’s victories in the tourney’s first two rounds put the Tigers in the semifinals of the 16-school event, where the Tigers took on third-seeded Forsyth on Wednesday, Dec. 29.

Hastings said that despite the losing effort, it may have been the best game his ballclub has played this season.

“It’s the most engaged we’ve been all season,” he said.

“We executed the game plan flawlessly. In the end, it just came down to hitting shots, and we didn’t hit enough. Had we just made a couple more shots in the course of the game, we win this one.”

In the 52-49 defeat, Seymour jumped out to an early lead.

The rival Panthers rallied to close the quarter, and Seymour held a 15-10 advantage after one stanza.

However, Forsyth had the game’s momentum. Seymour was cold offensively as the Panthers pieced together several baskets over the next eight minutes and led 23-20 at halftime, closing a 12-minute rally that saw Forsyth outscore the Tigers 21-7.

“We were in good shape at the half,” Hastings said.

“For them to have that kind of a run over 1-1/2 quarters with us only trailing by three points was a positive thing,” he noted. “Bottom line, we were in the game.”

The game remained close in the final frame.

A Richards basket gave the Tigers a 38-37 lead with 4:51 to play, but on the next possession, a Forsyth foul was followed by a technical foul that changed the momentum with 4:39 to play, giving the Panthers a 40-38 advantage that they wouldn’t surrender.

Over the next four minutes, Seymour cut Forsyth’s lead to one point on four occasions, with the last coming at the 25.5-second mark on a Henry layup that made the score 48-47. In the game’s final 20 seconds, the Panthers used a layup and two free throws for the fi nal margin.

Richards had 9 points, 8 rebounds and 3 assists.

Henry scored 8, while Benson had 6 points, 6 rebounds and 5 steals.

Junior Eli Nunnally rounded out the scoring with 2.

The Tigers shot only 37 percent (20 for 54) from the field, including 2-for-15 accuracy from three-point range.

“We played well enough to win,” he said. “Give credit to Forsyth for making some big plays late and especially for hitting several clutch free throws.”

Hollister took a 46-35 entering the fourth quarter, but the Tigers came back and cut the defi cit to as few as two points with two minutes to play.

“We just couldn’t get over the hump,” Hastings said.

“We cut (the lead) to two and three points late, but we just couldn’t tie it or take a lead.”

Hollister ended the game with a huge rebounding edge of 32 to 18.

Bryant was Seymour’s offensive leader with 14 points, 3 rebounds and 3 assists.

Benson had 8 points and 3 rebounds, while Henry scored 7 points.

Richards had 5 points, 4 rebounds and 2 steals.

Daily and Nunnally rounded out the scoring; Daily had 3, while Nunnally had 1 point.

This week, the Tigers are competing in The Seymour Bank Winter Classic, where Seymour is seeded first in the eight-school event.

For more on the tourney, see the bracket and story in this week’s newspaper and online.