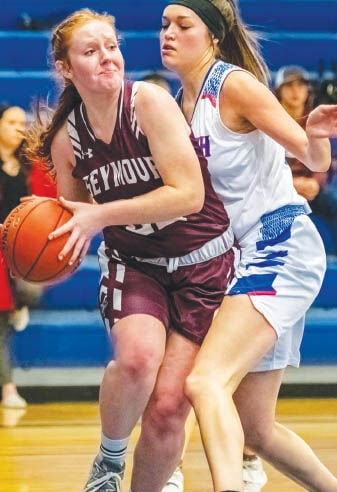 Seymour senior Crystal Misemer, left, drives the baseline in the Tigers' 62-32 loss on Saturday to Forsyth.

Seymour senior Crystal Misemer, left, drives the baseline in the Tigers' 62-32 loss on Saturday to Forsyth.

For the first time in nearly a decade, since the program’s glory days of district championships and state “Final Four” appearances, the Seymour High School varsity girls’ basketball team played for a tournament title last Saturday.

Although the Tigers fell short at the Galena Lady Bear Classic to Class 4 Forsyth for the event’s championship, head coach Derrick Jessen that simply making it to the title contest was a signifi cant feat.

“The girls were excited to be in a championship game,” Jessen said. “The way we got there showed a lot of heart and determination by coming back in the fourth quarter of the semifinals for a big win.

“They wanted to play in a championship. For several years now, these girls have played in a lot of consolation games in tournaments. This time, we played for a title. It also was a good experience for my younger girls on the roster ... to be a part of this experience.”

Seymour advanced to the first-place contest by posting a

pair of wins in the tourney’s first two rounds.

In first-round action, the Tigers won 53-29 over the Forsyth junior varsity last Thursday, then defeated Southwest Missouri Rush by a 41-36 count on Friday in the tournament’s semifinals.

“They’re a really good Class 4 team,” Jessen said of the 30-point defeat to the rival Panthers.

“Turnovers really hurt us. We had a season-high 38 of them. In the end, we didn’t make shots and gave them too many extra possessions.”

A brutal second quarter was the deciding factor.

Forsyth led 14-9 after the opening frame.

“I felt we got off to a fairly good start,” Jessen said. “We wanted to take their best player out of their offense, and we accomplished that.

“But we struggled offensively, especially with their full-court diamond press. Then came the second quarter.”

In the second quarter, Forsyth outscored the Tigers 26-8 to lead 40-17 by halftime.

The Panthers’ lead was 53-22 after three frames.

“Sometimes you get beat by a better team,” Jessen said.

“If we’re being honest, that’s what happened here. To me, it was very special to advance to the finals.

“I don’t think that Forsyth was 30 points better than us, but when you have six more turnovers than points, it’s hard to win a game or even keep the score close.”

Junior Hailey Felton paced the Tiger offense against the Panthers with 8 points and 7 rebounds.

With 3 points each were senior Crystal Misemer and freshman Alleigh Warren.

Misemer had 5 rebounds, while Warren chipped in with 4 rebounds, 4 assists and 2 steals.

Junior Madi Kyle rounded out the scoring with 2 points.

“I guess if you’re looking for a single thing that hurt us in this game, it was turnovers,” Jessen concluded.

“We’re 6-1 when we keep our turnovers below 20. That one loss was by one point to Chadwick. That’s the key for us ... limiting turnovers.”

Prior to the Tigers’ loss to Forsyth, Seymour posted a comeback win Friday night over Southwest Missouri Rush in the tourney’s semifinals.

Seymour trailed for most of the game.

“It was a grind,” Jessen said. “It wasn’t pretty. But as I told the girls, ugly wins are much better than pretty losses.”

The Tigers outscored Rush 15-4 in the game’s final eight minutes.

“Bottom line, we found a way to grind out a win,” Jessen noted. “The girls never once gave up, and that paid us many dividends at the end in the fourth quarter.”

Jessen said the key to the victory was his team’s defensive effort in the fourth quarter.

“We held them to only 12 points in the entire second half of this one,” he said.

Rasmussen had 10 points, 5 rebounds and 3 assists.

Although Henry was held to 2 points, she grabbed a team-best 10 rebounds.

In the tourney’s opener on Thursday, Seymour won by 24 points over the Forsyth junior varsity. However, after the first quarter, the rival Panthers were ahead 10-9.

“I put in the jayvee girls to start the second quarter, and to be honest, they are the ones who turned the tide in this game,” Jessen explained.

Seymour outscored Forsyth 20-2 in the second frame to lead 29-12 at halftime. The Tigers scored 24 points in the second half while holding the Panthers to 17.

Rasmussen posted a game-high 28 points in the victory, connecting on 6 of 12 three-point shots.

She added 6 rebounds and 6 assists.

Felton had 13 points and 13 rebounds.

Henry scored 8, while Misemer and freshman guard Jadyn Johnson rounded out the scoring with 2 points each.

Misemer also had 4 rebounds and 4 assists.

At the conclusion of the tourney, Rasmussen was named to the elite all-tournament team.

This week, the Tigers play a pair of games.

On Thursday, the Tigers play host to Norwood in a Summit