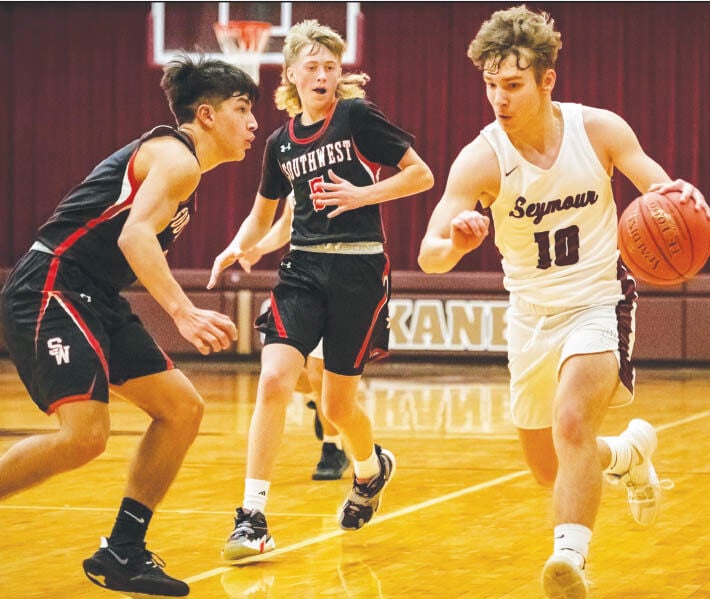 Tiger sophomore Eli Nunnally (10), right, a 6'0" guard, dribbles down the sideline in the Tigers' 58-33 victory Friday over Southwest of Washburn at the Spokane Invitational. Nunnally scored 14 points in the contest, which was Seymour's eighth win of the season. 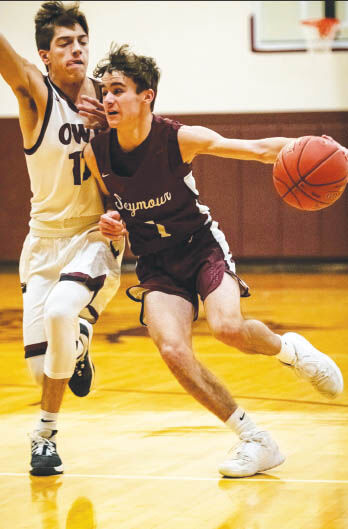 Seymour junior Payton Bryant (1), right, drives to the goal in the Tigers' 67-42 loss to the host Owls in the opening round of the Spokane Invitational early last week.

Tiger sophomore Eli Nunnally (10), right, a 6'0" guard, dribbles down the sideline in the Tigers' 58-33 victory Friday over Southwest of Washburn at the Spokane Invitational. Nunnally scored 14 points in the contest, which was Seymour's eighth win of the season.

Seymour junior Payton Bryant (1), right, drives to the goal in the Tigers' 67-42 loss to the host Owls in the opening round of the Spokane Invitational early last week.

Despite only one win and a pair of losses last week in tournament action at Spokane, Seymour High School head boys’ basketball coach Chris Hastings said tourney play has been pretty positive for his young ballclub this season.

After last week’s Spokane Invitational, Seymour’s season record stood at 8-9, a fairly strong mark for a squad that started the season with a 1-6 mark.

Seymour, seeded seventh, opened tournament play last Tuesday, Jan. 19, with a 67-42 defeat to the second-seeded host Spokane Owls, then bounced back last Friday with a 56-33 victory over Southwest of Washburn to advance to the event’s fifth-place game.

In the consolation championship Saturday, the Tigers fell 37-26 to Blue Eye.

“We struggled a lot offensively against Blue Eye,” Hastings said. “Our start wasn’t bad, and we actually led this game after the first quarter.

“But in a slow-paced game, we didn’t shoot the ball well at all. Defensively, we did a good job, holding (Blue Eye) to only 37 points. But you can’t beat a varsity team when you only score 26 points.”

After three quarters, Seymour was down 24-18.

“It was a pretty exciting offensive show,” Hastings said with a smile.

Blue Eye outscored the Tigers 13-8 in the final frame for the 11-point margin.

“Shots just didn’t fall,” Hastings said. “It’s as simple as that. We ended up shooting 29 percent from the field.”

Leading scorer Payton Bryant was held scoreless; however, the 5’8” junior guard did have 4 rebounds, 4 assists and 3 steals.

Was fatigue a factor?

In the consolation semifinals on Friday, Seymour got off to a quick start and cruised to a 23-point victory over Southwest of Washburn.

The Tigers led 19-5 after one quarter.

“We started off great,” Hastings said. “Eli (Nunnally) was hot early, hit three shots from three-point range, and early in the second quarter, we were up 25-5.”

In the third quarter, Southwest rallied as the Tigers ran into foul trouble.

“We did have our momentum stalled in the second half due to foul issues,” Hastings said.

The Tiger edge was 45-32 after three quarters.

“Fortunately, we really played well in the fourth quarter and outscored them 11-1,” Hastings added.

Seymour shot 47 percent (24 for 51) from the field, hit all three of its free throws and forced 17 turnovers.

The Tigers dominated in the post, scoring 32 points in the paint while holding Southwest to 10 interior points.

Bryant led the way with 15 points. He also grabbed 6 rebounds and handed out 3 assists.

Crump had 13 points and 5 rebounds.

Senior Nathaniel Hosiner had a season-best 8 points and 4 rebounds, while Benson and Pearce scored 3 each.

“You can’t spot a good team an early 15-point lead. I’ll give credit to Spokane. They have a really good team.”

Bryant was the Tigers’ offensive leader with 15 points, 3 rebounds and 2 steals.

Nunnally scored 7, while Benson, Daily and Pearce each

Hosiner rounded out the scoring with 2.

Benson, Daily and Pearce led the Tigers in rebounding with 5 each.

Daily had a team-high 4 assists.

Spring countdown: A look at five Huskers with early-impact potential