The railyard of Diggins is fully shown in this photograph from June 1906. 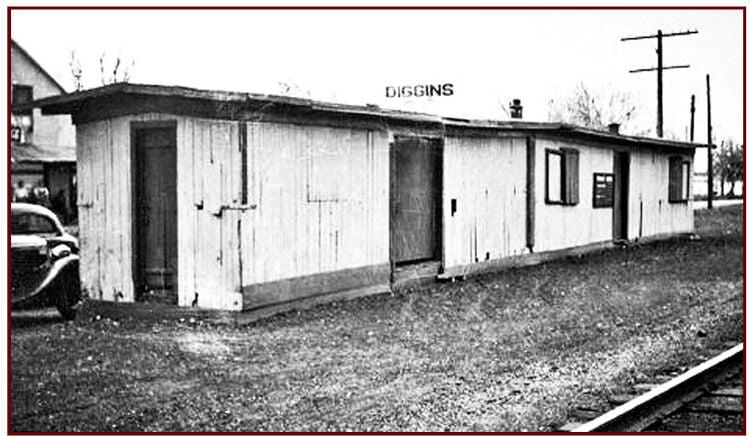 The old Frisco railroad depot in Diggins is pictured in 1947.

The railyard of Diggins is fully shown in this photograph from June 1906.

The old Frisco railroad depot in Diggins is pictured in 1947.

In the summer of 1887, which was 135 years ago, the communities of Linington, Stella and Cut Throat saw the establishment of a new railroad line nearby as an opportunity.

The three communities came together to form a new village, coined “The Village Of Heart.” At the suggestion of one Mrs. Townes (wife of the local dentist), it was named after Hiram W. Diggins, the railroad superintendent and erstwhile hotelier who oversaw the expansion of the Kansas City, Fort Scott & Gulf Railway eastward from Springfield.

Less than three weeks from now, the village of Diggins will mark the occasion with ceremony and celebration on Saturday, July 9, in Founders’ Park, located just south of U.S. 60 on Highway NN.

“We’re beginning at 9:30 a.m. (on July 9) with a patriotic presentation,” explained David Bowers, president of the Diggins Park Board. “We’ll raise the flag, sing the ‘Star-Spangled Banner’ and then take the ‘Pledge of Allegiance.’ There will be presentations to donors for the Founders’ Walkway and the other structures and projects of the last year or so.

“There’s a ribbon-cutting ceremony for the walkway, as well, and the dedication of the museum.”

Bowers’ eyes widened briefly as he grinned, “We’ve got a lot planned for the day.”

The day’s festivities will include musical performances from “The Isaac Kenneth Band,” “Dave Kilgore & Company,” “The Heard Family Singers,” “The Bluegrass Company” and gospel music from both the Diggins Baptist Church and the Greater Life Apostolic Church.

“There will be singing throughout the day,” Bowers said. “Isaac Kenneth will take the stage at 11 a.m. and play until noon. After that, it’s a continuous program until 3:30 p.m. Lots of music.”

Included in the schedule is the dedication of the Walton Pavilion, named after former village resident Sam Walton, the founder of Wal-Mart, whose grandfather opened and ran the first storefront in Diggins.

“They’ve honored their roots here, so we want to acknowledge that.” Bowers explained. The Museum Of Heart, with its new collection of historical artifacts and ephemera, also will receive it’s dedication on July 9.

There will be food.

“The Diggins Baptist Church is doing a fish fry, and the Zion Lutheran Church will be there with ice cream,” Bowers said with a smile. “The Shop (a new business on the village’s east side, located just west of Highway O) will doing hotdogs.

The village of Diggins will have cake, punch, coffee and water. We at the museum are going to have popcorn.

There’ll be plenty to eat for everybody.”

Webster County Clerk Stan Whitehurst will be there to talk with people about the coming expansion of U.S. 60, which includes a new overpass at the Highway A intersection at the village’s west edge.

“That’s going to have a big effect on our community, so lots of people have questions about it.” Bowers noted.

He added that author Gary Sosniecki, who with his wife, Helen, owned and operated the Webster County Citizen from 1988 to 1999, will be at the celebration, selling signed copies of his book, “The Potato Masher Murder: Death At The Hands Of A Jealous Husband.”

It’s the only book event Sosniecki, a former Diggins resident, has scheduled this year.

Bowers continued, “We’ll also be presenting the first annual Founders’ Day Award for innovation, design and compassion in the village of Diggins to its recipient in the morning at the dedication of the walkway.”

He expects about 200 attendees at the event.

“So we expect it to be in the middle or thereabouts.”

Parking for the event is available at the Zion Lutheran Church, as well as the Curtis property.

“We’ll have signs clearly marking the parking areas,” he said. “And for disabled or elderly people, you can park right there at the Diggins Community Building so you don’t have to walk as far.”

Over the last 135 years, the village of Diggins has been home to a tightly knit community.

“This is really a family reunion,” Bowers concluded.

“It’s a reunion for everybody who lived, worked, played, raised their kids here and all our friends. We all have a tie to this place. We want for everybody to come and share their experiences and stories of the community. The Founders’ Day Celebration exists to keep that going. It needs to be carried forward.”

"Top Gun" or topped out? Missouri-made fighter jets are falling out of military's favor.