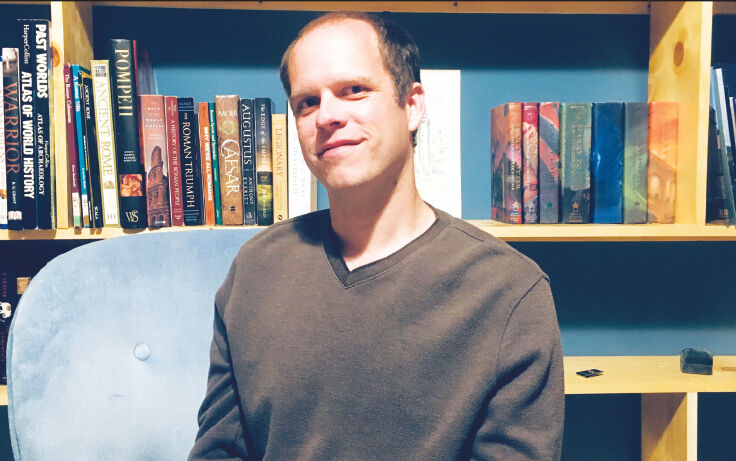 Seymour native and Seymour High School graduate Shane Cottle in the office of his Adrian home.

Seymour native Shane Cottle's three-part 'The Reguleid' book series can be bought online via Amazon. He's a 2005 graduate of Seymour High School, where as a senior he wrote the school play.

Seymour native and Seymour High School graduate Shane Cottle in the office of his Adrian home.

Seymour native Shane Cottle's three-part 'The Reguleid' book series can be bought online via Amazon. He's a 2005 graduate of Seymour High School, where as a senior he wrote the school play.

It all started back at Seymour High School, where teacher Julie Thomas allowed her strong English student Shane Cottle to write the school play.

Cottle, a senior, took up the part, wrote the script and turned it in to Thomas.

“This play is wonderful,” Thomas exclaimed, permitting the use of Cottle’s play “Dating Stinks” to go into production during the 2004-05 school year. He became the first student in Seymour history to write the school play.

“When Mrs. Thomas allowed me to write the play, it really opened my eyes to what I could do,” noted Cottle, who currently works as a mortgage-loan processor at U.S. Bank in Adrian, a small city located about one hour south of Kansas City.

Sixteen years ago, he was a fresh 2005 graduate and very strong English student at Seymour High School. Continuing his education, he pursued a degree in theatre, with a creative-writing minor from Missouri State University in Springfield.

His initial plans were to one day become a playwright.

“I often thought about how cool it would be to become a playwright and write all the time,” Cottle said, chuckling in an interview. “Then I had to remember that I would have to go to New York or a big city, and that’s not what I wanted.”

Life for Cottle was hectic after college. He was married a year after his graduation and found himself immersed in the business of life. He kept writing in his free time.

“I was always a kid who liked Harry Potter and all the fiction books,” he explained. “They were cool to me.”

Cottle began writing his own version of Harry Potter back in 2011.

This year, a decade later, he released his last book in his three-part series, “The Reguleid.”

With two young children, finding time for hobbies is difficult for parents. Cottle tries to carve time out for his writing during later hours.

“Normally once the kids go to bed around 8 or 8:30 p.m., I will stay up and write for a couple of hours,” he said. “It’s the perfect time to do it. I knew I needed to find time because writing is so important to me, so I try to find a couple of hours each day.”

Last year, the family made the move to Adrian, which is the hometown of his wife. He still makes trips to see his parents, Randy and Joy Cottle, both retired Seymour R-II School District teachers, once or twice a month.

For Cottle, writing these three books have been a great way to put out in the world an idea that originally began back in high school — with an almanac.

“I had this little almanac and would look at the solar system and was always so fascinated by it,” he explained.

“I also really liked looking at uncommon animals and thinking about how maybe their unique abilities could benefit humans.”

So, he took all of the information and formed a new character, Regulus Gregory, who is a teenage prince of a country called Genia. Cottle developed a three-part series that dives into Regulus’ unforeseen circumstances and new powers.

“The books follow Regulus and his family and friends all through their battles,” Cottle said. “All three are very different, Cottle’s series is self-published through Amazon, and you can purchase any three of The Reguleid series on Amazon for $13.99 (paperback) or $3.99 (eBook).

Why the unvaccinated live in an alternate universe