Seymour High School's renovated east entrance and new bathrooms will be on display next week when The Seymour Bank Winter Classic is under way at the high-school gymnasium. 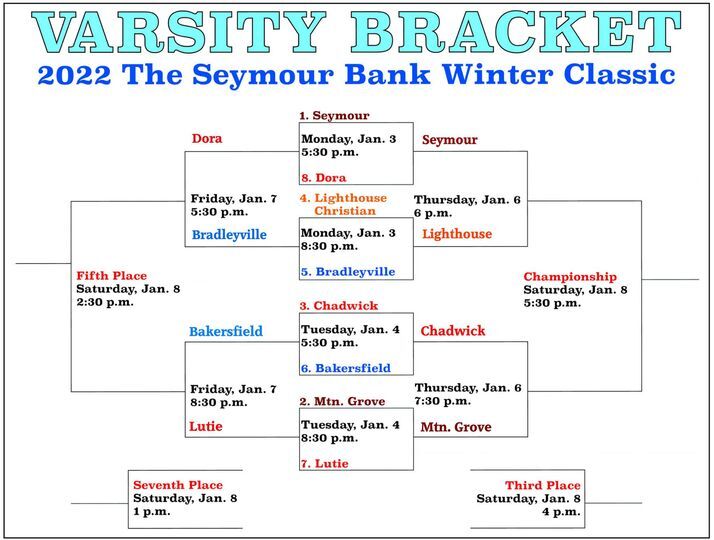 Seymour High School's renovated east entrance and new bathrooms will be on display next week when The Seymour Bank Winter Classic is under way at the high-school gymnasium.

Seymour is the top seed in The Seymour Bank Winter Classic, an eight-team boys’ basketball tournament played next week at the Seymour High School gymnasium.

There is a full field of eight schools in the varsity tournament, while four schools compete in a round-robin event for junior-varsity squads.

Bakersfield and Dora are new to the tourney.

In the junior-varsity tournament, there are four teams that will compete in a round-robin format.

Admission is free to both Seymour games on Monday for fans who wear Tiger gear, Superintendent Steve Richards said, as the Seymour R-II School District is unveiling its new east-entrance renovation to the public.

Games at The Seymour Bank Winter Classic will be played on five days — next Monday and Tuesday, Thursday, Jan. 6, Friday, Jan. 7, and Saturday, Jan. 8.

Final-round action on Saturday, Jan. 8, begins at 1 p.m. with the varsity’s seventh-place contest, followed by the fifth-place game at 2:30 p.m. The third-place varsity game is at 4 p.m., with the tourney’s championship contest slated for 5:30 p.m.

Complete tournament brackets are available at no charge upon request at the Webster County Citizen office, located on the west side of the Seymour square.