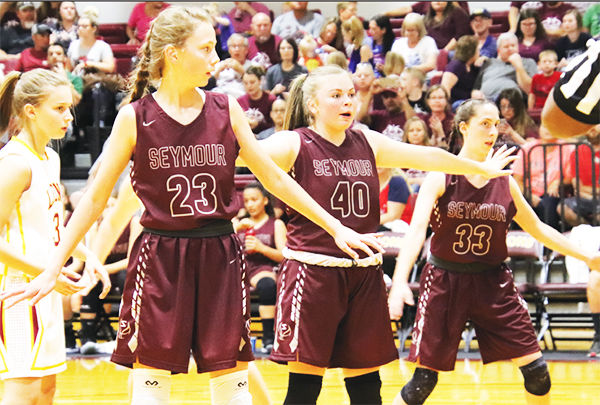 From left, Seymour players Addison Ridenour (23), Hannah Clark (40) and Jadyn Johnson (33) defend an inbounds pass in the Tigers' 25-20 victory over Mansfield in the season opener.

From left, Seymour players Addison Ridenour (23), Hannah Clark (40) and Jadyn Johnson (33) defend an inbounds pass in the Tigers' 25-20 victory over Mansfield in the season opener.

A year ago, the Seymour Middle School “A” girls’ basketball team won only one game.

This season, the Tigers have played twice.

And won both of them.

It’s the first perfect 2-0 start by the team in nearly a decade.

Reason for the solid start, which included road victories over Mansfield and Conway, respectively?

“This group gets after it defensively,” Tiger head coach Trent Copling said. “We won both games because of our defense.”

On Monday, Sept. 16, Seymour defeated Mansfield 25-20 in its season opener. Four days later on Friday, the Tigers won 35-26 at Conway.

“These girls play very hard ... I’ve got three or four girls who can guard full court. We put a lot of defensive pressure on our opponents.”

He said one of the squad’s strengths is its depth; Copling said he comfortably can play nine girls.

“This is a situation where hard work over the past year is paying dividends,” he explained. “This team comes in and works in the mornings, they work after school, they worked during the summer ... I’m very proud of them.”

The squad primarily is composed of eighth-graders who are joined by a pair of seventh-graders, Addie Kelley and Addison Ridenour. Ridenour, a 5’11” swingman, has emerged as the Tigers’ leading scorer.

In the opener at Mansfield, Seymour led 8-3 after one quarter, 10-3 at halftime and 17-9 after three quarters.

“But we only allowed nine points through the first three quarters, and when you are playing defense that well, then chances are you’re going to have a lead.”

Jadyn Johnson paced the Tigers with 10 points, while Ridenour added 6.

Katelynn Smith had 4 points, with 2 points each were Hannah Clark and Elisa Valbuena, while Nichole Harris rounded out the scoring with 1.

At Conway on Friday, Seymour fell behind early, trailing 12-9 after the opening frame.

Seymour’s margin was 23-17 after three quarters.

Harley Watkins added 4 points, Valbuena scored 3, and with 2 points each were Clark, Smith and Makayla Rowland.

Next action for the Tigers arrives Thursday when Norwood visits.

The first game starts at 5 p.m.

Discipline, respect and 400-meter repeats: Why a former pupil says Lubick and Frost are 'a perfect fit'