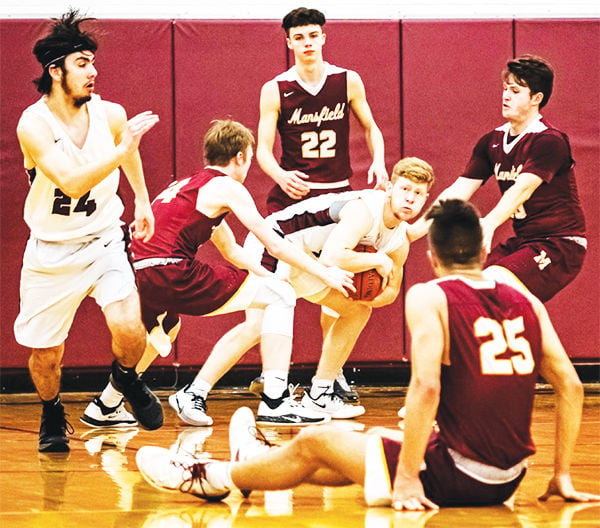 Seymour senior Carson Sturdefant, center, grabs the key rebound among a trio of Lions' defenders after Mansfield's Hesston Gray (25), on floor, missed a three-point shot with 3.2 seconds left in the Tigers' 43-40 win in first-round action at The Seymour Bank Winter Classic. At the far left is Seymour senior teammate Alan Ferrier (24). 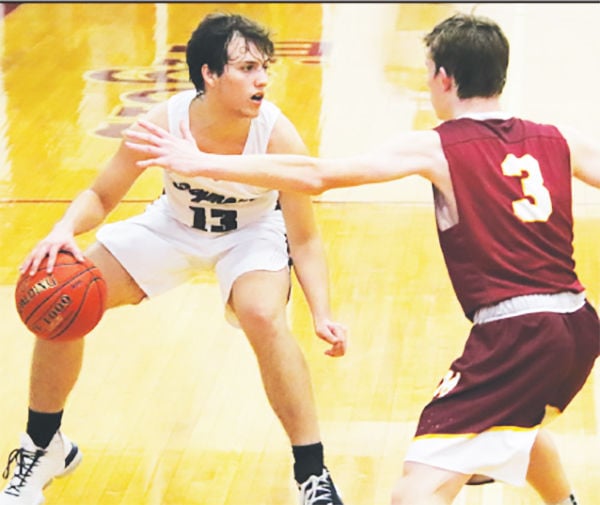 Seymour senior Carson Sturdefant, center, grabs the key rebound among a trio of Lions' defenders after Mansfield's Hesston Gray (25), on floor, missed a three-point shot with 3.2 seconds left in the Tigers' 43-40 win in first-round action at The Seymour Bank Winter Classic. At the far left is Seymour senior teammate Alan Ferrier (24).

For the first time in seven years, the Seymour varsity boys’ basketball team has reached the championship game of The Seymour Bank Winter Classic.

The Tigers of head coach Chris Hastings, seeded third, advanced to the event’s championship game by defeating No. 6 Mansfield 43-40 last Tuesday, Jan. 7, which was followed by a 53-33 upset victory over second-seeded Mountain Grove on Thursday.

Seymour’s 20-point win over the Panthers ended Mountain Grove’s five-year streak of tourney titles and improved the Tiger record to 6-6.

The Tigers were scheduled to face Springfield Lighthouse Christian in the tournament’s championship game Saturday; however, the contest was postponed until 8:30 p.m. tonight (Wednesday, Jan. 15) due to Saturday’s inclement weather.

After a close call against Mansfield in the tourney’s first round, Hastings said he was very pleased with his ballclub’s effort last Thursday against Mountain Grove.

“It was our most-complete game of the season,” he said. “We were efficient offensively and made a lot of big shots, while our defensive effort was outstanding.

“Anytime you hold a team to 33 points, you know that you’re doing your job at that end of the floor.”

Seymour opened the game with a 5-0 run and continued its momentum through the first quarter, taking a 16-4 lead after 6’0” senior guard Carson Sturdefant connected on a three-point shot just before the buzzer.

The Tiger lead grew to 22-6 on another Sturdefant three-pointer with 4:09 left in the half, but the Panthers held Seymour scoreless over the frame’s final four minutes and cut the deficit to 22-12 at halftime.

Sturdefant’s long-range heroics continued in the second half.

Another Mountain Grove rally was ended by a Sturdefant three-pointer at the 1:11 mark that gave the Tigers a 38-23 lead. At the end of the third quarter, Seymour led 41-25.

Mountain Grove would get no closer than 13 points the rest of the way.

Sturdefant’s final three-point shot came with 2:30 to play and gave the Tigers a 51-31 lead.

Sturdefant finished the game with 20 points — 18 of them coming on six three-pointers.

Leading scorer Trint Sampson was held to 8 points, but he grabbed a team-best 13 rebounds and handed out a season-high 8 assists.

Senior Steele Johnson rounded out the scoring with 2.

“I know Mountain Grove is a bit down this year and is playing a lot of young kids, but this still was a very good win for us,” Hastings said. “(Coach) Duane Hiler and his team always are very fundamentally sound and play hard, so any time you get a win over Mountain Grove, it’s a good thing.”

In the event’s first round, Seymour survived a serious scare from a young Mansfield team despite opening the game with an 11-0 run.

Seymour led 11-2 after one quarter and held an 18-6 lead with five minutes left in the half.

“Offensively, we quit executing. Defensively, I felt we got a bit lazy.”

Seymour’s poor play continued into the third quarter as Mansfield led 34-28 at the 1:53 mark before three consecutive Tiger baskets tied the score at 34-34 entering the final frame.

There were five lead changes in the fourth quarter.

Sampson scored again with 44.4 seconds left to increase the Tiger lead to 42-38.

A basket with 16.3 seconds left cut Seymour’s lead to 42-40, then after a Johnson free throw, the Lions had two chances to tie the game trailing 43-40.

Neither shot fell, and Seymour escaped with a three-point victory.

Sampson carried the Tiger offense with 25 points, 14 rebounds and 3 assists.

Crump scored 4, while Sturdefant was held to 3 points. Johnson had 1 point.

“In any tournament, you just want to survive and then advance,” Hastings said. “That’s what we did in the Mansfield game.

Bears 2020 vision: They could already have all they need at inside linebacker