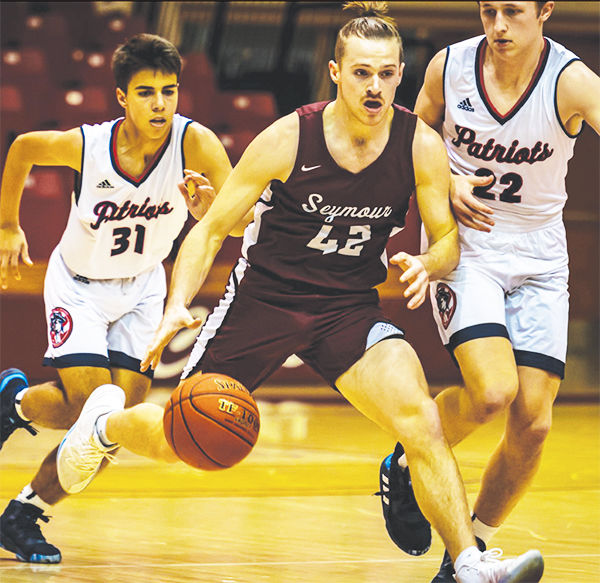 Tiger senior Trint Sampson (42), center, drives past a pair of School of the Ozarks defenders en route to two of his 20 points in Seymour's 74-43 road win last Friday over the host Patriots.

Seymour's Steele Johnson (13) grabs a rebound in the Tigers' 31-point win over School of the Ozarks. Johnson scored 11 points and had 9 assists.

Tiger senior Trint Sampson (42), center, drives past a pair of School of the Ozarks defenders en route to two of his 20 points in Seymour's 74-43 road win last Friday over the host Patriots.

Seymour's Steele Johnson (13) grabs a rebound in the Tigers' 31-point win over School of the Ozarks. Johnson scored 11 points and had 9 assists.

The Seymour varsity boys’ basketball team saw its win total hit 12 last week with road victories over Gainesville and School of the Ozarks.

Seymour defeated Gainesville on Tuesday, Feb. 4, by a 64-60 count in Summit Conference action.

On Friday, the Tigers cruised to a 74-43 decision over School of the Ozarks (S of O) in Point Lookout.

“It was a good week,” Tiger head coach Chris Hastings said. “It’s never easy to win on the road at Gainesville, which is a tough place to play.

“And our effort at School of the Ozarks was one of our best of the season. It was a great all-around game.”

Hastings said his ballclub’s effort at Gainesville was near perfect for 3-1/2 quarters.

With four minutes to go, the Tigers led by 22 points.

“The last three or four minutes, we played exceptionally bad,” Hastings noted. “We missed free throws and turned the ball over. This may sound unbelievable, but we just held on for the win.”

That lead reached 62-40 with four minutes to go.

“Prior to the last half of the fourth quarter, we executed well and made shots,” Hastings said.

“Gainesville is a tough place to play, especially on their Senior Night. We did so many things well. But the end of this one sort of spoiled the overall effort. At the end of it all, I was pleased to get out of Ozark County with a win.”

Leading the Tigers’ scoring attack was 6’1” senior forward Trint Sampson with 22 points. He also had 8 rebounds, 3 assists and 3 steals.

Senior Skyler Newman, a 6’3” forward, had 5 points and 7 rebounds, while senior Cooper Hickey rounded out the team’s scoring with 2.

On a negative note, the Tigers connected on only 5 of 15 free throws.

“It’s not a good thing when you shoot three-pointers at a higher percentage than free throws,” Hastings said. “And the problem is that we’ve done that several games this season.”

Seymour's Steele Johnson (13) grabs a rebound in the Tigers' 31-point win over School of the Ozarks.

Johnson scored 11 points and had 9 assists.

From behind the three-point line, the Tigers were 9 for 15, 60-percent accuracy.

Three nights later at S of O, Seymour jumped out to an 18-11 lead after one quarter and cruised to a 31-point win.

“This was one of our best all-around games of the season,” Hastings said. “Trint (Sampson) got us going early and jump started us. Throughout the game, we knocked down shots.”

“I felt we were a better team than S of O, but not 30-plus points better,” Hastings said. “We played well.

“Anytime we hit 13 three-pointers, we’re dangerous. We had everyone contribute.”

Sturdefant led the way with 23 points and 5 rebounds.

Johnson scored 11 points, hitting 3 of 5 three-pointers, while chipping in with 5 rebounds, 5 assists and 4 steals.

Newman had 5 points and 5 rebounds, while junior Evan Crump had 4 points and a team-high 6 assists.

Scoring 2 points each were Hickey and freshman Bill Daily, while sophomore Bryson Benson rounded out the team’s scoring with 1.

“Payton Bryant has been a nice varsity addition the past two games,” Hastings noted. “He gives us additional depth and another scoring option.”

Late Tuesday, the Tigers played at Mansfield in a league contest.

This Friday, Fordland visits Seymour as the Tigers will play host to annual homecoming ceremonies.