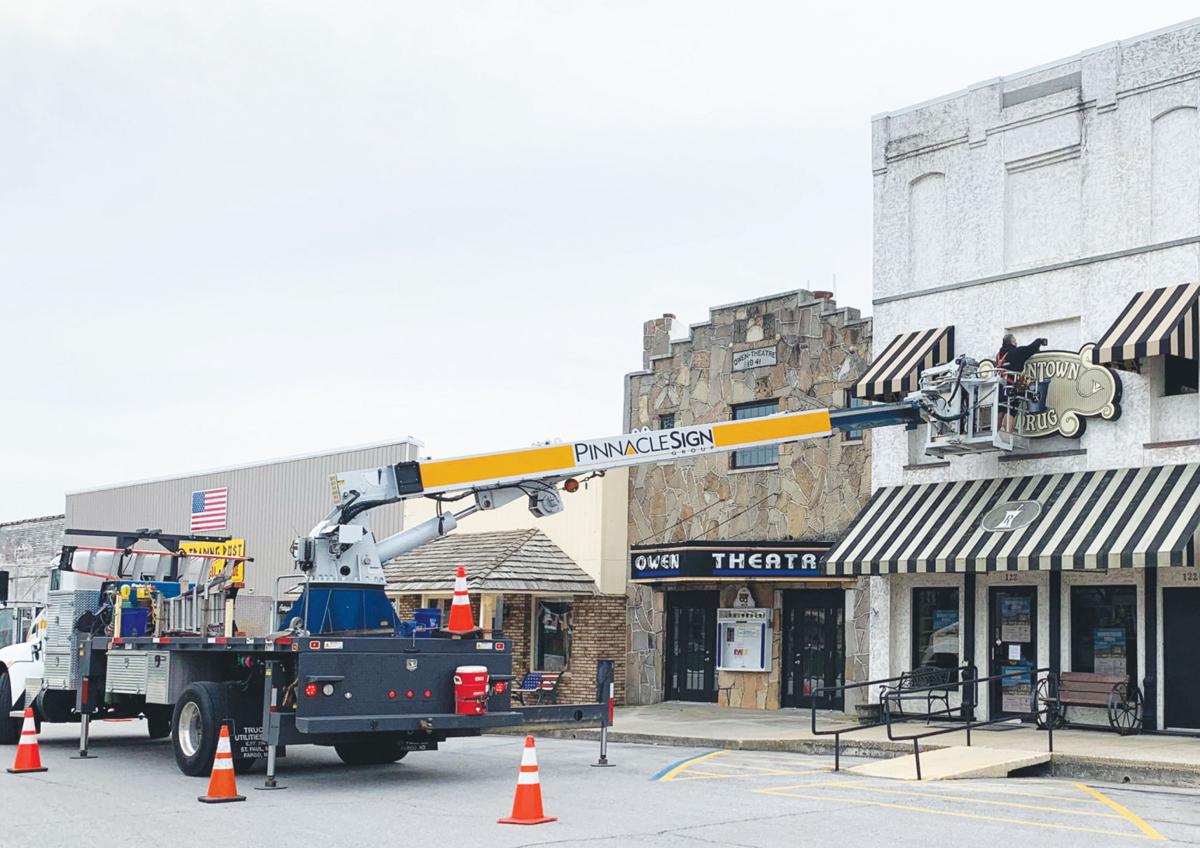 The giant gold sign at Downtown Drug was removed early Monday morning by a crew from Pinnacle Sign in Springfield.

The store abruptly shut its doors early last Wednesday, March 25, with a front-door notice that announced the business had sold to Walgreens. 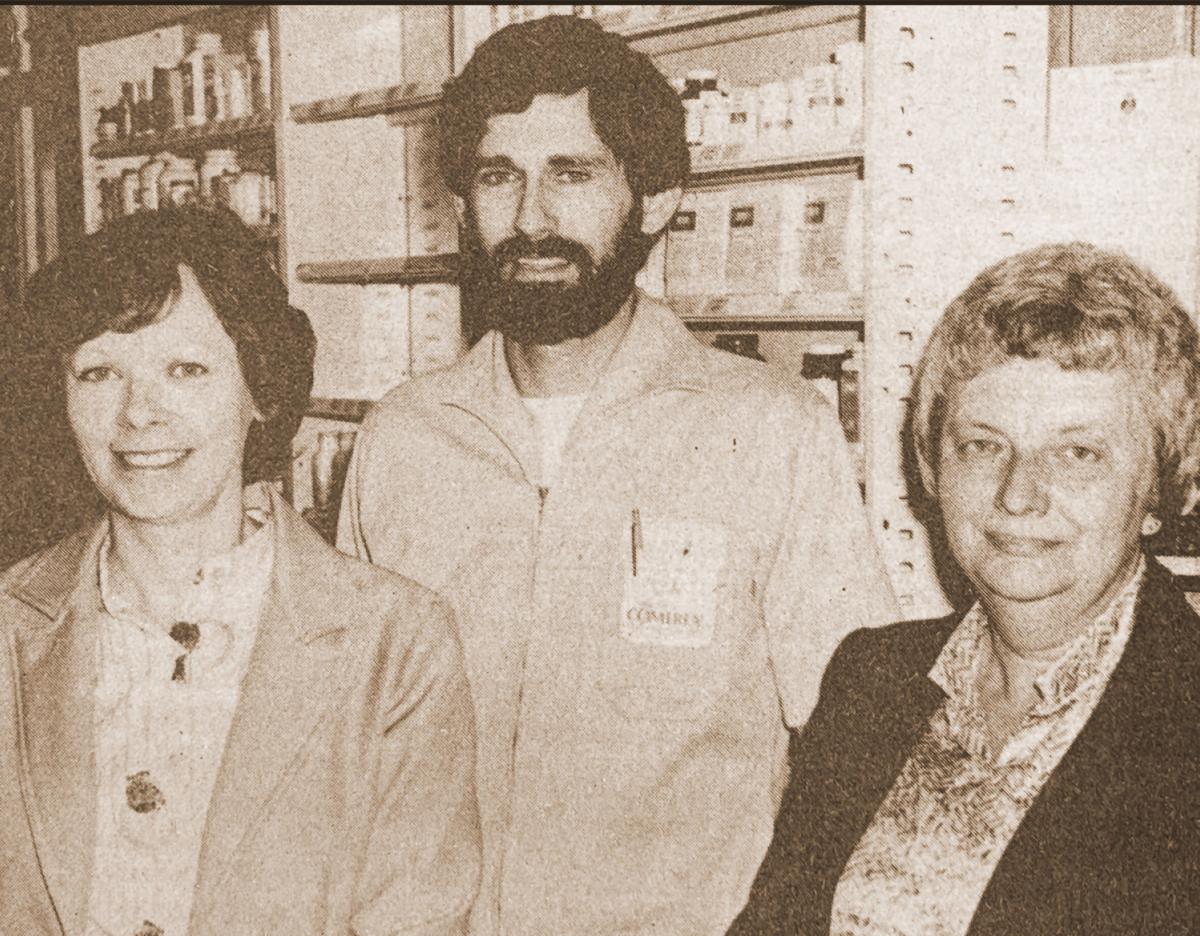 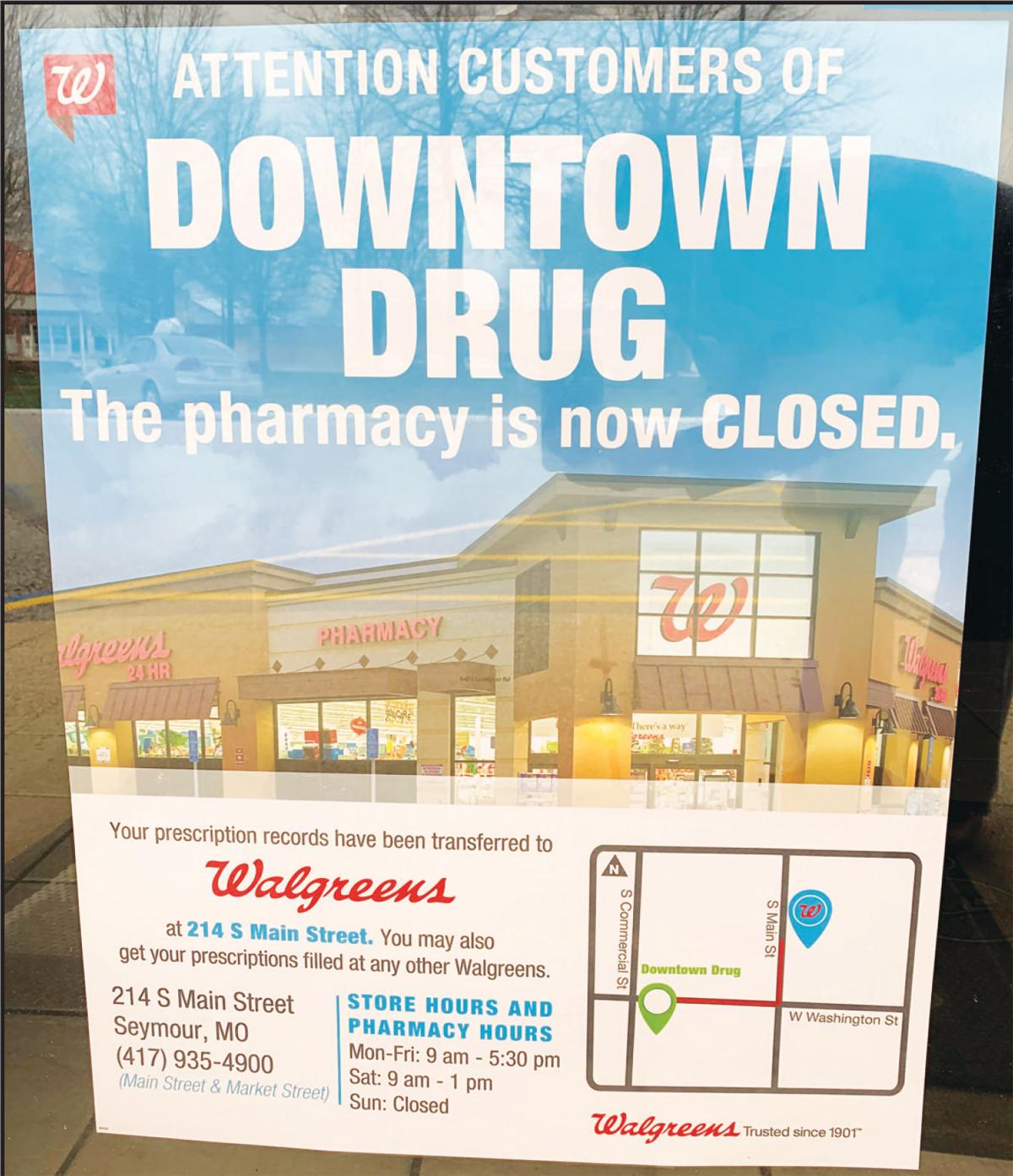 The giant gold sign at Downtown Drug was removed early Monday morning by a crew from Pinnacle Sign in Springfield.

The store abruptly shut its doors early last Wednesday, March 25, with a front-door notice that announced the business had sold to Walgreens.

At 5:28 p.m. last Tuesday, March 24, Downtown Drug on the south side of the Seymour square served its last customer of the day.

He told them the store was closing.

So immediate, in fact, that Downtown Drug wouldn’t be reopening the next morning.

“It was very emotional,” explained Beverly Barlow, who worked at the local pharmacy since it opened in June 2013. “We had a meeting (with Coker and the staff) near the end of the year last November, and Jim told us that everything was okay. We were doing great.”

That wasn’t the message last week.

“Jim told us that the Seymour store was losing money,” employee Judy Christensen said. “He also told us that he had sold the store to Walgreens, that (the sale) was effective immediately and that he was paying us for two pay periods, which is a month.”

Followed by fear, especially when they learned that per his sale agreement with Walgreens, Coker couldn’t employ any of the current Seymour employees at his Rogersville Pharmacy.

“I’m 61 years old,” Christensen said. “Here we are in a national pandemic with COVID-19, and I’m unemployed. None of us can even look for a job now ... almost all of the counties and cities around us are under a quarantine.

“This just couldn’t have come at a worse time.”

Becky Kime, who has worked as a pharmacist at Downtown Drug since the store opened, said that prior to last week, none of the employees had an idea that the store was struggling or that a closure was coming.

“I don’t like it that we didn’t get to say goodbye to our customers,” Kime said.

“We averaged about 160 (prescriptions) per day, so we had a lot of people in the store every day. You build relationships with people. They almost become family members.”

Barlow knows that bond more than anyone.

She began working at Seymour pharmacies in the 1970s, nearly 50 years ago, when she was hired to count pills in 1974 at the Seymour Pharmacy when it was on the west side of the city square.

She was one of Rick Curtiss’ first two employees when he purchased the Seymour Pharmacy in 1981, then worked for Ernie Snyder when he bought the business from Curtiss. She stayed with the store until 2013, when Coker opened Downtown Drug.

“I was in a state of shock for a day or two ... I’m probably still in one now,” Barlow said. “When Jim told us what was happening (last Tuesday), the girls were crying. None of us knew this was coming ... not at all.

“When I came to work here for Jim several years ago, the appeal to me was working for a local owner, not a corporation. In the past, I enjoyed working for owners who were local, like Ernie (Snyder) and Rick (Curtiss). With Jim, that opportunity again was offered.”

Kime said she understands why the employees weren’t notified in advance.

“I know that Walgreens made Jim do it this way,” she said. “I understand that. But the timing wasn’t good. There probably isn’t a worse time than now for people to be out of work.”

“Jim told us that he would never sell to Walgreens ... he said that many times,” Christensen said. “Well, that’s what he did.”

In an interview on Friday morning, Barlow, Christensen and Kime said they want for all of their customers to know that they will be missed.

“I think that we can speak for all of the girls at Downtown Drug in thanking each and every one of our customers for their business and friendship over the years,” Kime said. “We will love and miss them.”

“I’m sorry it had to end like it did,” Barlow concluded.

“I’ve been doing this job for a long time, and this sure isn’t the way I wanted to say goodbye to so many people that I love and care about.

Dr. Fauci: Second wave isn't inevitable if we do this

Keilar pushes Alabama Secy of State on his promise to Trump