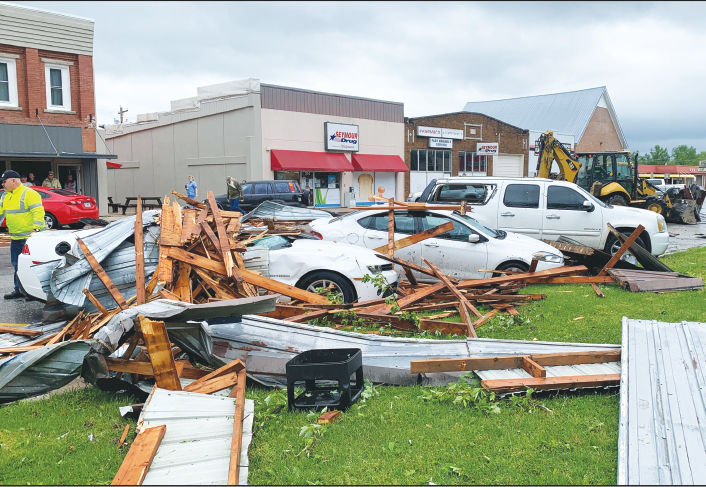 These three vehicles parked on the west side of Main Street likely are total losses from the storm.

These three vehicles parked on the west side of Main Street likely are total losses from the storm.

Yet almost everything was left intact.

“We may have dodged a bullet,” North Ward Alderman William Pogue noted.

But if the first storm was a rifle, the second that arrived at 1:43 p.m. was a machine gun.

And the damage was severe.

As winds estimated at 80 miles per hour struck, the city square was hit the hardest, as the roof from the century-old former MFA feed building on the north side of the square was lifted, elevated more than 40 feet in the air, then came crashing down on Main Street and the square’s east side, damaging six vehicles, four of them likely a total loss, while throwing debris, including metal and wood, in the middle of the highway and along the north side of the square.

However, her analysis was much like Pogue’s from two hours prior.

“We were fortunate,” Gintz said.

“Had just one thing been different, we’ve probably got several serious injuries and perhaps a fatality or two. Yes, this is bad. But it could’ve been much worse.”

Sgt. Chase Davis of the Seymour Police Department said at Monday afternoon’s scene that only one person sustained minor injuries as the two-story MFA’s roof came crashing down on Main Street.

“(The injured lady) only had a few cuts and bruises,” he said.

The person who took the largest blow was Bill Sturdefant, who was driving north on Main Street when the storm hit. His maroon Dodge truck took a direct hit from a huge piece of the roof, complete with lumber and metal.

What Sturdefant did do was stop the large roof piece from striking a red Chevrolet Cruze parked at Renne’s Place hair salon.

Inside the car was an infant child and her grandmother.

“Had Bill’s truck not taken that blow, the piece of roof would’ve hit that car, and we likely would have had a very serious injury or fatality,” Davis said.

“For the sake of others, his truck was in the right place at the right time.” will be a total loss.

City crews immediately were at the damage scene, doing all they could to clear the wreckage. Traffic on Main Street was completely halted for more than one hour as the street was covered with nails, lumber, metal, tin and all sorts of debris.

Many merchants left their businesses to help clear the damage.

Many others also helped, including Matthew Mahan, who lives on South Street, several blocks from the square.

“This is why I live in Seymour and love this community,” Mahan said. “People help people. It’s like a family. And I felt like it was my job to chip in and help in any way that I could. I’m just glad no one was seriously hurt.”

After the site was cleared, the city’s outdoor tornado-warning sirens were activated as a new round of high winds carrying a potential tornado approached Seymour just after 3 p.m.

“May is letting us know it’s here,” Crump said. “This is becoming a long day.”

As of 3:10 p.m., many local residents had converged at the Seymour Safe Room. It was the second time the facility had been utilized in the past six days.

Musician connects with his neighborhood during pandemic