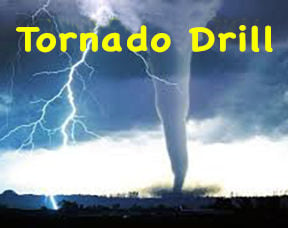 The Seymour Safe Room is located on East Clinton Avenue (Business 60), across from the Seymour High School baseball field.

The Seymour Safe Room is located on East Clinton Avenue (Business 60), across from the Seymour High School baseball field.

And at 10 a.m. that morning, the city of Seymour will be participating in the statewide tornado drill.

City Emergency Management Director Bob Crump said that during the drill, Seymour’s outdoor warning sirens will be activated, and the Seymour R-II School District will be testing its severe-weather procedures, which includes moving students and staff to the Seymour Safe Room.

“It’s a good opportunity to practice safety,” Crump noted. “Not just for the school ... but for all residents. The sirens will sound, emergency actions will be practiced by public officials, and we ask that residents also participate.”

“These sirens are to warn people who are outdoors,” Crump said. “They are not designed to reach into houses, businesses, vehicles or wake you in the middle of the night.

If the city loses its electricity, two of the sirens will not work. The one at the safe room is connected to the generator there, so it’s the only one that can operate if the city’s power is out.”

Crump said these sirens are tested monthly at 10 a.m. on the first Wednesday of every month, weather permitting.

The weather also will play a role when the statewide tornado drill arrives on March 3. If there is inclement or threatening weather, the alternate for the drill is at 10 a.m. Thursday, March 5.

The city’s safe room is located at 700 East Clinton Avenue, just across the street from the Seymour High School baseball field.

To build the facility, the city partnered with the state of Missouri, with authorization given in September 2009. The safe room is designed for a maximum of 1,194 individuals, with a target population being students, teachers and staff of the Seymour R-II School District.

It was built in accordance with FEMA (Federal Emergency Management Agency) 361 guidelines, which must be adhered to in the usage of the facility. It is intended to provide protection during a short-term extreme wind, such as a tornado.

Crump explained that the safe room is equipped to provide only the basic essentials to protect and support all occupants, including an automatic power generator, water, restrooms, heating, cooling, several methods to receive weather information, basic first-aid supplies, 200 folding chairs and folding tables.

He said there are several basic rules local residents must follow when seeking safety at the safe room.

• You may pull as close to the facility’s door as possible to let you family out.

• Once inside, one member of the family must register, listing their name, address and total number of people who entered the safe room.

• If activated during the school day, all students and staff will be located in one area and not allowed with the general public.

• Anyone who enters the safe room and appears to be under the influence of alcohol or drugs will be placed in an isolated area, and law enforcement will be notified.

• Only certified aid animals are allowed in the safe room. Owners must be able to show documentation of the animal’s certification, must be kept on a leash and under control at all times and prepare for the animal’s sanitary needs.

Crump noted that in southern states, peak tornado season is March through May, while peak months in the northern states are during the late spring and early summer.

“Missouri is a border state, so both of those seasons come into play for us,” he said.

He added that tornadoes are most likely to occur between 3 p.m. and 9 p.m., but they can occur at any time in the day or night.

To that end, he advises local residents to take preventative measures as tornado season approaches.

“One thing I advise everyone to do is to purchase a NOAA weather-alert radio with a battery backup and tone alert feature that automatically alerts you when a (tornado) watch or warning is issued,” Crump said.

He said residents should listen to local radio or television news to stay informed about watches and warnings.

“Determine places to seek shelter, such as a basement, a storm cellar or a FEMA-approved storm safe room,” Crump said. “If you do not have a basement or storm cellar and cannot make it to the city’s safe room, then seek shelter in an interior hallway or room on the lowest floor away from windows. Put as many walls as possible between you and the outside.”

Crump also advised assembling a disaster-supply kit to have in your home shelter or to take to the safe room.

“Depending on where you are going to take shelter, some of the items you may want to put in your kit would be a flashlight, quilt or blankets, quiet-type activities for children, a battery-powered radio, snacks, bottles of water and any special items for special-needs individuals, phone chargers, prescription medications and infant needs.”

When March 3 arrives, Crump said an easy opportunity to practice for severe weather is present.

“It’s just a good way to be prepared,” he said.

“At the city and school, as well as with first-responders, we will be acting as though the situation is a real one,” he concluded.

“I hope that local residents will do the same and just do a walk through of what they will do in the event of severe weather striking Seymour.”