The new Old Depot Coffee Company is set to open in downtown Seymour by summer's end. 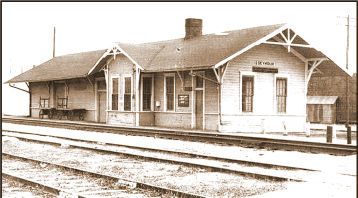 The new Old Depot Coffee Company is set to open in downtown Seymour by summer's end.

A new coffee shop is coming to Seymour.

Located on the south side of the Burlington Northern Santa Fe railroad tracks on North Commercial Street, the Old Depot Coffee Company is a block north of the northwest corner of the Seymour square.

Its location is less than 100 feet from the old Frisco train depot that served Seymour from 1882 to the late 1960s for the San Francisco & St. Louis Railroad Company.

The new shop is owned by Andrew Peters, who first purchased the back portion of the building and made it a fabrication shop. When the front section came up for sale, Peters knew he needed to buy it.

“We had pushed around many business ideas around, but we kept coming back to a coffee shop and thought if we bought this building, we could finally make it happen,” Peters explained.

There were local ties in the mix.

“My family is from Seymour, and my grandparents used to run the cafe down the street, and I really wanted to continue their business in a sense,” Peters continued.

A resident of Seymour, Peters works here locally at his fabrication shop.

He noted that as more and more businesses flee out of the city and nearer to the highway, downtown Seymour becomes more desolate.

This is where he wants to help.

“We need to bring more people to downtown and make them see the potential,” Peters said with a smile.

“Our business is one of the first you see when you enter the square, and we knew when we saw it that we had to do something.”

His new coffee shop will have all house-made coffee.

They will grind it themselves and even sell it.

All coffee flavors will be named after nearby townships in Webster County.

While coffee will be emphasized, it will not be the only thing sold.

“Fried bread will be sold,” Peters said. “They’re kind of like a beignet. It will be a great thing to enjoy with your coffee.”

He said they plan to run the business themselves, but the family also will employ Seymour residents and nearby students to work.

“We hope this will grow and create an influx of jobs here,” Peters said. “This coffee shop could be a terrific addition to Seymour as it could create new jobs for the local economy.”

Peters hopes that in the future, his coffee shop will help to put Seymour on the map.

He hopes the word gets out about the shop and that there is always someone coming to see it.

“We want this to help people come to Seymour and see what this town truly is and how amazing of a community it is,” he concluded.

The shop’s opening is still a ways away.

Peters said the Old Depot Coffee Company is planned to open sometime from the mid- to late-summer months, with a grand opening being announced at a later date.

Analyst: You can sue the goverment, but chance of success is slim