The Fordland Memorial Library is located on Main Street in the 800-resident city west of Seymour. 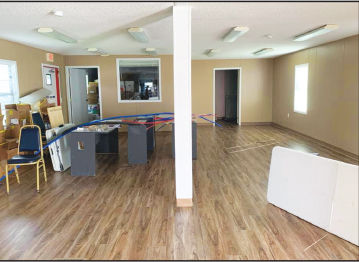 New flooring was installed in the Fordland Memorial 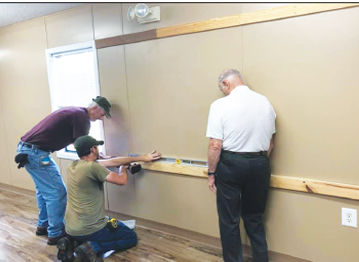 Book shelving was built for the library earlier this month.

The Fordland Memorial Library is located on Main Street in the 800-resident city west of Seymour.

New flooring was installed in the Fordland Memorial

Book shelving was built for the library earlier this month.

Back in September 2015, a group of passionate people met at the La Galette Berrichonne restaurant in Fordland.

They met with one goal in mind — to build a library for the next generation of Fordland residents.

During this time, the Fordland Middle School librarian was being paid to stay late by the Webster County Library in Marshfield to help establish a public library for Fordland residents without having a stand-alone shop.

Residents were ill-informed about the program, and few people actually visited the school-based library during its extended hours.

That’s when the aforementioned board that first met in 2015 set out in the city with a petition.

The petition asked one simple question of Fordland residents:

The response was nearly 100 people of people polled saying “yes.” Library volunteers then went to Fordland’s city council to approve a library coming to town. It was approved; now finding a place for the library and the funds to get it completed were the next steps.

“The board consists of passionate retired librarians from Fordland and nearby cities, as well as many people from the community who have hearts for this city’s next generation,” explained Nicholas Inman, president of the board charged with bringing a new library to Fordland.

Inman is joined by seven others on the library board, including Becky Fisher, the group’s secretary and treasurer, Judy Kasterke, Varena Manion, Dea Schuder, Diana Wright, Joyce Inman and Terry Thomas.

When the Fordland R-III School District decided to build a new pre-school building, the board reached out to see what the school’s plans were for the old building.

The district answered, saying the new library could have the building if they would relocate it. With a building now in its hands and the wheels moving for the project, the board decided to reach out to media outlets to help get the word out about the new library.

Hundreds of people from nearby states and cities reached out to help the new library get up and running. Shelves, art and even books were donated by people and organizations.

When the county library moved locations, it got rid of many books, and they were given to Fordland’s library board for its endeavor for a new library.

“We reached out to tell people about our plans and didn’t expect the outpouring of people who wanted to help,” Inman said. “It was crazy how many people wanted this to happen, and that’s when we knew it had to make it happen.”

Money became the next concern as it was time to get the building’s interior and exterior work done.

“We had to get creative,” Inman noted. “We had citywide cookouts, yard sales and change drives to help bring in money. We wrote grants and had some super-generous donors who we could not have done any of this without.”

He said the library always is accepting donations.

Donations can easily be made through the Community Foundation of the Ozarks (CFO), with donations dedicated to the Fordland Memorial Library. Donations through the CFO are tax deductible.

Inman remembers that when he was a child, he would spend summers in Fordland with his grandmother, Joyce, who joins him on the library board.

“My favorite part of each week in the summer was when the library ‘bookmobile’ would come to town,” he explained.

“You were able to get a book and read all you wanted just to return it for a cool new book that next week.”

Inman, who doesn’t live in Fordland, said that he has a piece of his heart in Fordland.

“I love this town, because my family is here,” he said.

Volunteers are always greatly needed at the library. If you would like to volunteer, call Fisher at 417-299-1485.

If you would like to donate, donations can be sent to the Fordland Memorial Library at P.O. Box 265, Fordland, MO 65652, or to the CFO at 425 East Trafficway Street, Springfield, MO 65806. All donations are tax deductible.

The library is located on Main Street in Fordland, “caddy corner” to the post office.

You can find the library and many updates involving the facility on its Facebook page, which is titled “Fordland Memorial Library.

Beyond the Call of Duty Volunteer EMS