Joe Blaine tends to his plants at The Blueberry Patch, located about three miles east of Seymour. 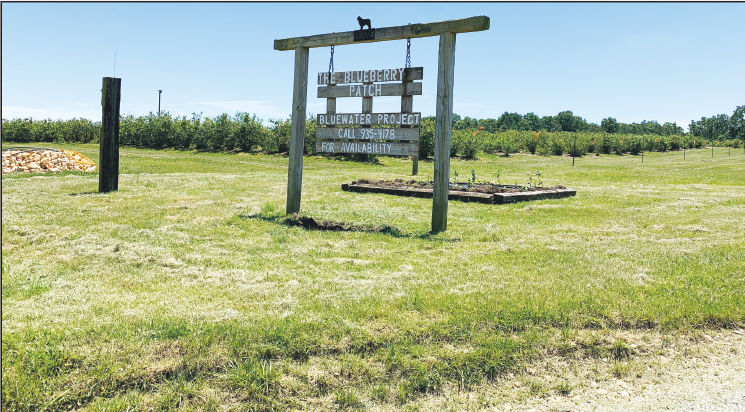 The Blueberry Patch is located at 986 Crosstie Road, just off U.S. 60 and three miles east of Seymour.

Joe Blaine tends to his plants at The Blueberry Patch, located about three miles east of Seymour.

The Blueberry Patch is located at 986 Crosstie Road, just off U.S. 60 and three miles east of Seymour.

Do you enjoy blueberries?

If you live in southern Webster County and specifically in the Seymour area, then you’re in luck.

Because there’s a blueberry patch in Webster County.

Just three miles east of Seymour is The Blueberry Patch,located at 986 Crosstie Road, just south of four-lane U.S. 60 between Seymour and Cedar Gap.

Joe and Marcia Blaine are the owners.

It’s an occupation the Blaine family has been involved in since the early 1980s.

“When we returned to Missouri and the Seymour area four decades ago, I knew that I wanted to work outside and that farming was my passion,” Joe Blaine explained.

“However, I learned the cruel reality that to make it as a farmer, I had to work outside of the farm.”

For a year, he worked for the city of Seymour in the parks department.

But as a college graduate and soil scientist, Blaine began exploring options for making money on the farm.

“Without a lot of capital, our options were limited,” he noted. “So, we began looking at specialty crops to grow.”

That’s how blueberries entered the picture.

What followed was a learning process.

“There were some tough years. We battled disease. We lost a lot of plants. There were things to learn in terms of starting the plants and getting them to grow.”

Berries were harvested for three years, then the patch was lost due to root rot.

So, the Blaines went back to the drawing board — or, in this instance, the planting board.

By 1994, those blueberry plants were yielding berries.

The patch then opened to the public and throughout the 1990s, its customers, revenue and berry yields grew.

Another 1,000 plants were added in 2000, and today, The Blueberry Patch consists of two groups of plants that are roughly 30 and 20 years old, respectively.

In its best years, the Blaines’ blueberry operation has a harvest of 3,000 or more gallons.

“Growing blueberries is not my profession,” Blaine noted.

“It’s a hobby, and that necessitates sacrifi cing time that could be spent for other things.”

To that end, Joe Blaine always has had a loyal assistant in his wife, Marcia.

“She has always assisted in the management of the blueberries, especially during picking season,” he said. “In 2009, when I was injured and unable to work, she not only maintained the patch, but she also managed marketing the crop on her own.

“Without Marcia, there would be no blueberries.”

When the family’s blueberry business was in its early years, each of the four Blaine children, all now adults, played a vital role, ranging from planting to scaring birds from the patch.

“I’ve got a lot of funny stories I could tell about those times,” Blaine said. “I know there were times when the kids would be exhausted and frustrated from the work. But they were always at our side, putting in the time, despite farming not really being an interest for any of our children.”

Fast forward to the present, and Blaine said this year’s blueberry crop should be a good one.

Berries likely will be larger than usual because of the heavy rains of 2020.

“Due to the rains and slightly cooler temperatures than we normally have, the harvest will be moved back about two or three weeks,” Blaine said. “Normally, we would have opened the first Saturday in June, but that’s been moved back as the blueberries aren’t ready yet.”

Right now, his target date for the opening of the 2020 blueberry season is Saturday, June 20.

“If not, we’ll delay our opening to Tuesday, June 23, or the following Saturday, June 27.”

There are two types of berries at The Blueberry Patch:

In the future, there will be two new varieties, Bluecorp and Legacy, which could be ready to pick within a couple of years as many of the older plants at the patch will go out of production, replaced by the 1,441 aforementioned new plants that were purchased in 2015.

The price to pick is easy to calculate.

“In recent years, we began charging by the pound, but due to the (COVID-19) situation, we felt it would be much easier just to set a flat price of $12 a gallon,” Blaine explained.

“We provide the containers, which are lined with a plastic bag that makes it quick and easy to take the berries home after they are picked.”

However, there isn’t an option of purchasing pre-picked blueberries.

There are no limits on how many berries are picked. It can be as small as a single gallon and as large as 10 or even 20 gallons.

But there are limited hours.

The Blueberry Patch, once open for picking, is open only 10 hours each week.

Hours are from 7 a.m. to noon on Tuesdays and Saturdays.

Blaine said the season lasts around a month.

“This year’s season, presuming it opens June 20, would then end around July 20,” he said.

He added that those who come to pick should know that only cash or checks are accepted as payment; no credit cards will be processed.

“Try to bring smaller bills or something close to exact payment,” he said. “We’re doing that to try to eliminate the handling of money or at least signifi cantly limit it.”

The only other significant rule that blueberry pickers need to note this season is that all small children need to stay with their parent or guardian.

Additional information about The Blueberry Patch can be found on its website at www.upickblueberries.com.

For smart phones with GPS mapping, the patch easily can be found by typing in “986 Crosstie Road,” which is a Seymour address.

Veteran: Each day Trump's in power, our enemies celebrate