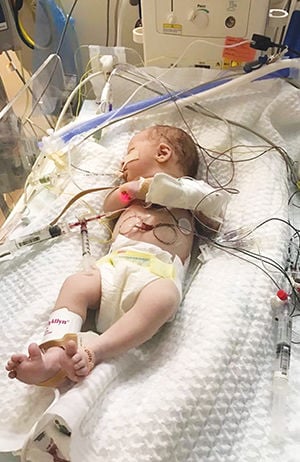 Newborn Ivy Ruth Johnson has a total of eight IVs and numerous other machines trying to pump life into her oxygen-deprived body. 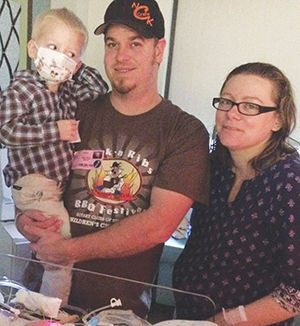 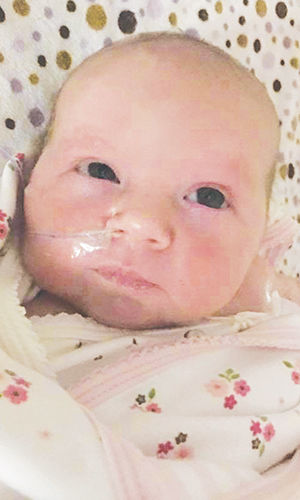 Ivy Ruth Johnson is awake and alert on New Year's Day. Doctors had feared that she would not live through her first night after being born on Christmas Eve.

Newborn Ivy Ruth Johnson has a total of eight IVs and numerous other machines trying to pump life into her oxygen-deprived body.

Ivy Ruth Johnson is awake and alert on New Year's Day. Doctors had feared that she would not live through her first night after being born on Christmas Eve.

Have you ever been told that it will take a miracle for your newborn baby to survive?

While most of us haven’t experienced such a devastating situation, Heath and Amber Johnson of Seymour needed a Christmas miracle to save their little Ivy Ruth.

Christmas Eve started out normal enough. Amber was due to deliver her baby the next week, but she began experiencing labor contractions early that morning.

Already having a 4-year old son, she was familiar with labor and delivery, so she continued with the family plans to have Christmas brunch at noon with Heath’s parents, Greg and Delilah Johnson, also of Seymour. By the time the meal was eaten and gifts were opened, Amber decided that she should probably call the doctor but was reluctant to make the trip to a Springfield hospital with the expectation of being sent back home to wait for the labor to progress further.

Once at the hospital, doctors examined Amber and determined that labor was far enough along to go ahead and admit her. All indications were that it would be a normal labor and delivery. The baby was in good position with a strong heartbeat, so it should be just a matter of time before the parents would be cuddling their healthy baby girl.

But what happened later that evening shows how fragile life can be and how life can change in an instant.

Labor was progressing normally, but it would still be a while before the baby would come out, so Heath decided that was a good time for him to step out to get something to drink before Amber began heavy labor.

Little did he know what was going to happen in the few minutes that he was gone to get a soda.

It was at that time that the fetal heart monitor went silent, and Amber started bleeding profusely. Recognizing a sudden placental abruption, the doctors and nurses immediately knew they had to race against the clock to save the lives of both Amber and her baby.

Placental abruption is the medical term for a partial or total separation of the placenta from the uterine wall and is relatively rare in the United States. There appears to be no known cause for it to occur, and it is totally unpredictable.

In Amber’s case, the placenta had completely detached from her uterus, draining blood from the unborn baby and from Amber herself.

Doctors and nurses sprang into fast gear getting Amber to an operating room to perform an emergency C-section delivery of the baby. With no time for sedation, Amber was aware of the emergency and recalls that the doctor was literally cutting into her abdomen as the assistants were positioning her on the operating table. Having her cell phone available, Amber had quickly typed only two words to Heath:

“Come Back.” He returned to her room where a nurse was waiting to escort him to the operating room. Medical personnel later explained to Amber that she would have bled to death had she not already been at the hospital to receive immediate medical attention.

With one medical team tending to Amber’s surgery, another team was attending the newborn baby that had lost nearly all of its blood and had no heartbeat. Hearing the hectic movements and frantic calls for more oxygen and more medicine, Amber knew that her baby had not taken a breath and was in grave danger. It was shortly before 9 p.m. on Christmas Eve.

After 17 minutes with no heartbeat and not yet having taken a breath of oxygen, baby Ivy Ruth appeared to be lifeless.

While the nurses continued to work with Ivy, the doctor called Heath over from Amber’s bedside and explained that they had done all they could do but the baby was showing no signs of life. The medical team was ready to give up their resuscitation efforts but had one last dose of epinephrine drawn and went ahead and injected it into her.

Then the first miracle occurred as a tiny flutter of a heartbeat finally stirred within the baby.

The clock monitor showed that it had been 19.5 minutes since resuscitation efforts had begun. Having detected a faint ...

Read the complete article online by subscribing to our eEdition on Tuesday evening after 5 p.m. ($10 with printed subscription; $20 alone) OR in our newspaper available for sale (.75) on the stands or in the office($15) on Wednesday OR delivered to your home (see rates on Page 2 or call Anna at the office, 417-935-2257)